Autism is a neurodevelopmental disorder currently affecting as many as 1 out of 166 children in the United States. Numerous studies of autistic individuals have revealed evidence of cerebral hypoperfusion, neuroinflammation and gastrointestinal inflammation, immune dysregulation, oxidative stress, relative mitochondrial dysfunction, neurotransmitter abnormalities, impaired detoxification of toxins, dysbiosis, and impaired production of porphyrins. Many of these findings have been correlated with core autistic symptoms. For example, cerebral hypoperfusion in autistic children has been correlated with repetitive, self-stimulatory and stereotypical behaviors, and impairments in communication, sensory perception, and social interaction. Hyperbaric oxygen therapy (HBOT) might be able to improve each of these problems in autistic individuals. Specifically, HBOT has been used with clinical success in several cerebral hypoperfusion conditions and can compensate for decreased blood flow by increasing the oxygen content of plasma and body tissues. HBOT has been reported to possess strong anti-inflammatory properties and has been shown to improve immune function. There is evidence that oxidative stress can be reduced with HBOT through the upregulation of antioxidant enzymes. HBOT can also increase the function and production of mitochondria and improve neurotransmitter abnormalities. In addition, HBOT upregulates enzymes that can help with detoxification problems specifically found in autistic children. Dysbiosis is common in autistic children and HBOT can improve this. Impaired production of porphyrins in autistic children might affect the production of heme, and HBOT might help overcome the effects of this problem. Finally, HBOT has been shown to mobilize stem cells from the bone marrow to the systemic circulation. Recent studies in humans have shown that stem cells can enter the brain and form new neurons, astrocytes, and microglia. It is expected that amelioration of these underlying pathophysiological problems through the use of HBOT will lead to improvements in autistic symptoms. Several studies on the use of HBOT in autistic children are currently underway and early results are promising.


A HUGE Thank you to Susan and Pat for changing my world!!! I have had CRPS for 17yrs now suffering was my middle name..my husband had to secretly call Rapid Recovery to set up everything because he knew that if I knew what he was doing I would have a million excuses on why I couldn't go.. Well he got me there and I did the treatments reluctantly at first but with the support of my husband going in the chamber with me for the first week and the support from Susan and Pat..my world has changed!! There is nothing in this world that could explain my gratitude for what they've done for me and my family other than spreading the word about Rapid Recovery and Susan and Pat they are awesome!!! Thank you Teri and Dave.. www.hbot4u.com 909 477 4545
Posted by Gma at 3:27 PM No comments:

Connor Barrett was not given much hope when he was born. Autistic, blind and deaf with orthopedic, neurological, digestive, and respiratory disorders his parents were advised that he would live out his life in an institution for the severely disabled.  His doctors did not know how wrong they were.

“Connor started receiving Hyperbaric Oxygen Therapy at Rapid Recovery Hyperbarics in San Bernardino when he was almost three years old.”  States his mother Peggy Barrett.  “Prior to Hyperbarics, he was unable to do anything other than squirm around on his back.  He could not see or hear and had minimal interaction with anyone.  After three treatments he began to follow objects with his eyes and actually held his own bottle.  He continued to progress and after forty treatments starting walking with a walker and feeding himself with a spoon.  He is now four years old and attends pre-school where he colors, uses scissors, does puzzles, rides a tricycle and interacts with his classmates.  His vision has improved to the point that he now wears glasses and can see almost 100%.  He loves to play the piano and is a joyful addition to our family.”

“I am truly pleased with Connor’s overall progress”, says his pediatrician, “He can now see, hear and walk.  His growth has improved tremendously placing him in the fifty percentile on the growth charts for the first time since his birth.”

Dr. Donald Underwood, D.O., M.D.J.D., M.P.H., is the Medical Director at Rapid Recovery Hyperbarics.  “The results I have witnessed for some of these patients are truly amazing.  Some of them now have the ability to see, hear and walk.  For most there is a definite improvement in their quality of life.”

Susan and Patrick Rodriguez,C.H.T., E.M.T., D.M.T., are the owners of Rapid Recovery Hyperbarics.  “We are so happy to have helped so many families over the past ten years.”  Susan adds, “Being the mother of three children who have benefited greatly from Hyperbarics, I know first hand how Hyperbarics can change a persons life.  My children are the reason that I got started and continue in Hyperbaric Oxygen Therapy.”

Peggy Barrett feels the same.  She explains, “Due to my son’s miraculous recovery I have now devoted my career to Hyperbaric Oxygen Therapy.  I attended classes, completed an internship and passed the National Board Examination for Certified Hyperbaric Oxygen Technologists.  Because Susan and Hyperbarics have given so much to my family, I felt it was only right to give this opportunity to other families in need of hope.”  She now works at Rapid Recovery Hyperbarics as a Certified Hyperbaric Technologist.

Numerous published articles support the benefits of Hyperbaric Oxygen Therapy for both children and adults for the following conditions:


Gas embolus and cardiac arrest during laparoscopic pyloromyotomy in an infant.

PURPOSE: High volume tubing is used to deliver carbon dioxide during laparoscopic procedures. Failure to prime the tubing with carbon dioxide prior to abdominal insufflation may result in the delivery of nitrogen-containing air to the abdominal cavity. We report a case in which initial insufflation of laparoscopic gas resulted in immediate cardiovascular collapse requiring prolonged resuscitation. Persistent intracranial emboli following the arrest may have resulted from nitrogen contamination of the delivered gas. CLINICAL FEATURES: A 12-day-old female underwent laparoscopy for pyloric stenosis. During initial insufflation of the abdomen, the patient had an abrupt decrease in end-tidal carbon dioxide (CO(2ET)) associated with bradycardia and pulseless electrical activity. Three hours after successful resuscitation and open pyloromyotomy, computerized tomography documented intra-arterial gas within the cerebral and hepatic circulations that resolved following hyperbaric oxygen therapy. Magnetic resonance imaging five days later revealed watershed infarcts in the right frontal and parietal regions. Nitrogen, an insoluble gas not easily eliminated from the body, was likely the gas present within the patient's circulation several hours after the event. It was unlikely carbon dioxide, which is a highly soluble gas that binds to hemoglobin and is rapidly buffered by the carbonic anhydrase system and excreted by the lung. Room air contamination of high volume insufflation tubing allows nitrogen to enter body cavities during endoscopic procedures. CONCLUSION: Persistence of emboli following endoscopic procedures suggests that the entrained gas is insoluble. Room air contamination increases the potential for catastrophic events during laparoscopy and other endoscopic procedures. 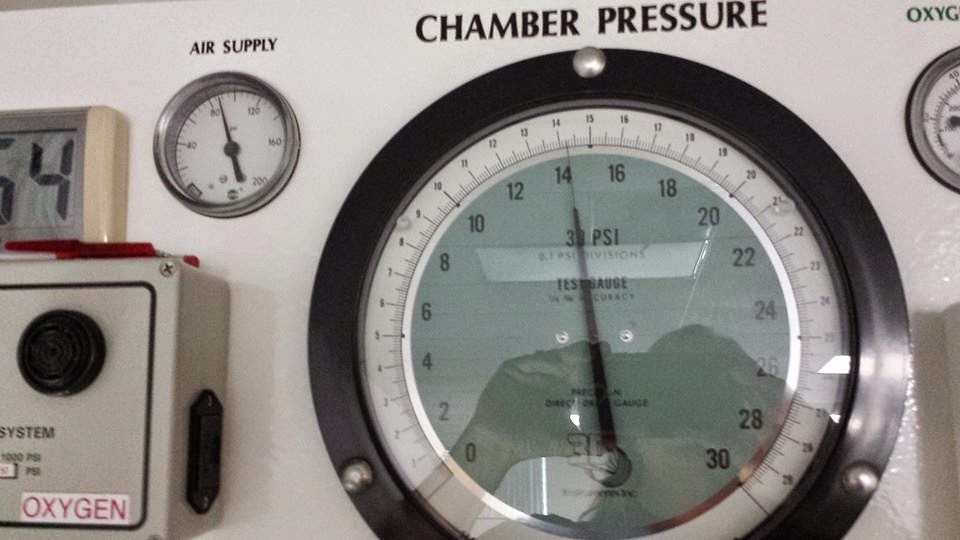